Curious what yours is worth? Write us. 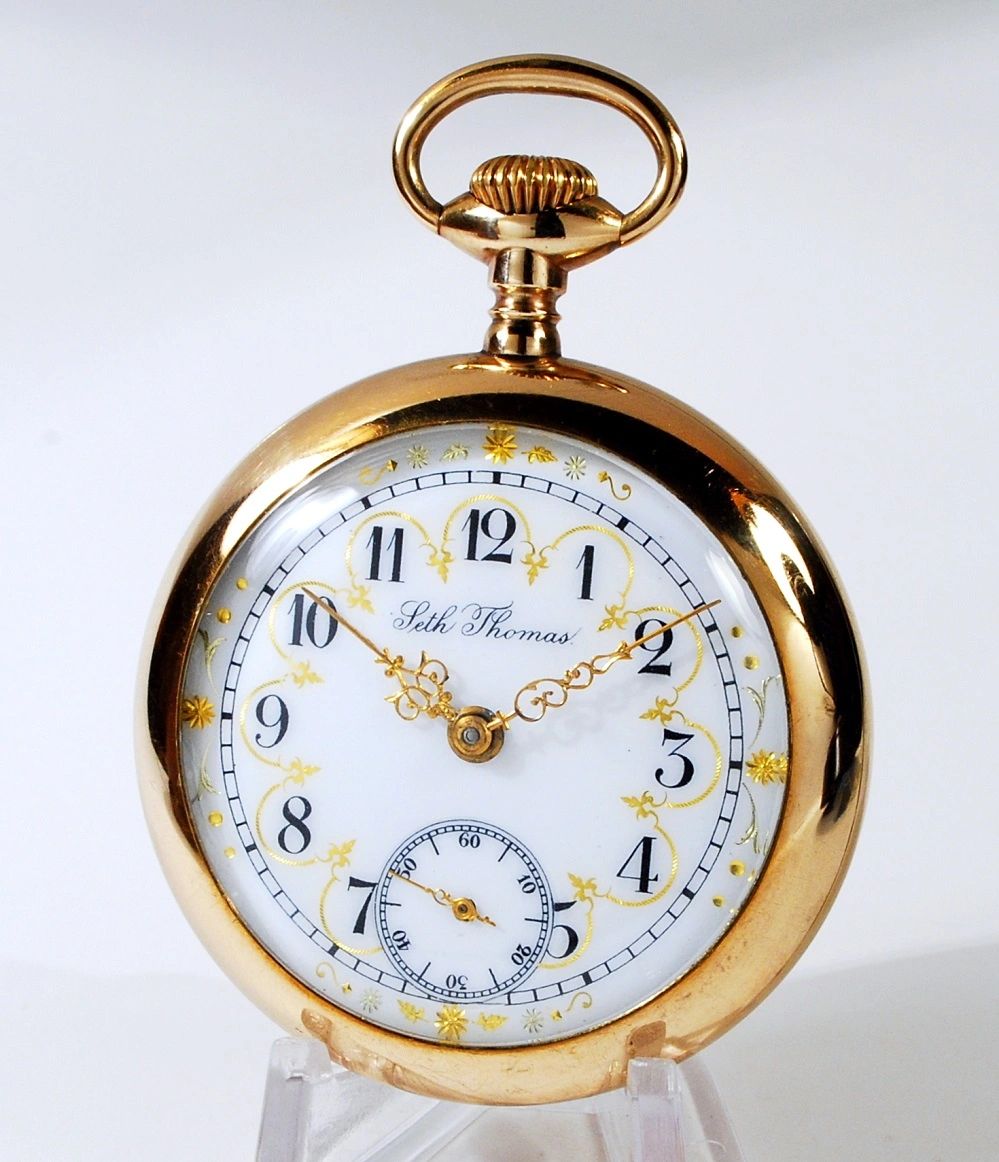 You've found the Seth Thomas Research website, which was created to reconstruct the factory's 30-year output of pocket watch production and exists as a gathering point for data.  It's the most comprehensive and accurate resource for vintage Seth Thomas watches of its kind, featuring:

This website is owned, maintained, and privately funded by American Timekeeper, specialists in heirloom pocket watch restoration.  All of the photographs and data contained on these pages are protected by intellectual property rights and may not be copied or used elsewhere.

Have Your Watch Restored

If nobody contributes, then the site can't improve

Write us at americantimekeeper@gmail.com and please make sure that all of your photographs are in focus, close up and well-lighted.  Both of the following pictures are necessary:

Your watch will be identified correctly and logged on the appropriate chart, adding to the total.

A new named grade has been discovered!

It’s the 7-jewel Yale Watch Co, reported so far in the hunting Model 7 of the Old Eagle Series. This brings the total named grades to six, with the others being Diamond, Eagle (image only), Empire, Garden City, and Montgomery Ward (20th Century) for Sears, Roebuck & Co.

Curious if your great-grandfather was a jeweler?

For a watch to be added to one of the 32 charts maintained on this site any photos of it must be clear and well-lit so that its details are visible.

Even with the advent of digital cameras and smartphones, taking a decent picture is apparently difficult for some people. Ebay sellers post wretched photos like this one, which of course are thoroughly useless.

Seth Edward Thomas was born just after the Revolutionary War in 1785, in Wolcott, Connecticut. He apprenticed under Eli Terry as a clock-maker at the age of 22, eventually buying his employer out and moving a few miles away to Plymouth Hollow. There he set up his own clock business in 1813, making both tall clocks and mantle clocks with wooden gears before switching to brass movements in 1842. His company was incorporated in 1853, employing hundreds of workers and turning out thousands of clocks annually in dozens of different models. He died at the age of 74 in 1859, and years later the town of Plymouth Hollow was renamed Thomaston in his honor.

​​Up to that point no American clockmaker had attempted a parallel industry of high-grade watch production, although several had small sidelines of cheap dollar watches. It was his youngest son Aaron that took over the business, and it was his grandson, Seth E. Thomas Jr, who would push the company to start making pocket watches a quarter of a century later, in 1883.

Seth Thomas splits from partner Silas Hoadley in 1813 and sets up his own shop, and a few years later Eli Terry pays his former employee to produce a new style of shelf clock, called a "mantle". By the 1840s wooden gears are phased out as cheaper stamped-brass parts become standard. The factory has roughly 40 workers and annual production reaches 10,000 clocks in all models.

The Seth Thomas Clock Company is officially incorporated in 1853 with $70,000. Spring-driven clocks are introduced, largely replacing weight-driven clocks, as annual production tops 30,000. Seth Thomas Sons & Co is formed in 1865 to make brass escapements and purchases an existing building for this purpose, which becomes known as the Marine Shop. By the 1870s the factory employs 500 workers turning out 100,000 clocks a year in over a hundred different models.

Work begins on an enormous addition to the Marine Shop for a new watch factory and automatic screw-cutting machines are purchased from the Star Manufacturing Co. New York City native Herman Reinecke is hired away from local rival Waterbury Watch Co in 1884 to design the Model 1, the factory's first watch, and is awarded two patents for it the following year when the 11-jewel gilt debut model is marketed to the public for the first time at a price of $12.00.

Charles Higginbotham, master watchmaker at the Hampden Watch Co, succeeds Reinecke in 1886 and designs several new 18-size watches to replace the Model 1.  Higginbotham, born in Ireland in 1840 and a Civil War veteran, receives a patent for his improved mainspring T-end brace and would eventually become superintendent of the Illinois Watch Co.  Seth Thomas's Model 2, their first hunting movement, goes into production in four new grades, and the Model 3 succeeds the M1 as the factory's 18-size open-face watch, starting at SN 10,901.

The male-stemmed hunting 6-size Model 14 is released as the firm's first ladies' watch in 1890.  Higginbotham is awarded another patent (his fourth one) for a new style of stem-setting mechanism , leading to the design of the 18-size Model 5 as Seth Thomas's flagship railroad pocket watch in 1893. The Maiden Lane arrives two years later as the factory's highest grade, named after the firm's New York City office, with a 17-jewel variant costing $25.00.

The first Eagle Series (Models 6 and 7) is introduced as lower-cost open-face and hunting watches. The water tower built over the factory collapses just before Christmas in 1898, smashing through the roof into the basement, but none of the 175 workers gets injured. Higginbotham leaves for the Illinois Watch Co position in 1900 as production of the Models 2 and 3 ceases.

The New Eagle Series (Models 8 and 9) is launched at a price of $3.65 each as the company's response to mass-produced "dollar" watches in 1904.  A new Trade Catalog is published, listing dozens of grades with parts lists for each model, and the key-wound Model 4 and the Old Eagle Series are both discontinued. The 0-size Model 20 is introduced as the factory's first wristwatch.

The 16-size Model 21 begins production, and the Centennial Series is announced to commemorate Seth Thomas's 100th anniversary in a last effort to revive their fading pocket watch industry. A year later the supplemental catalog is published with only the Centennial Line remaining and pocket watch production ceases as the factory turns its efforts back to clocks.

Seth Thomas Sons & Co was incorporated in 1865 to make escapements for brass clock movements, and the company bought an old sawmill on the corner of Bridge and Marine Streets in Plymouth Hollow, raising the roof and adding a giant clock tower over the stairwell, and it was here that the four-story addition for the new watch factory would be built twenty years later.

Work began in 1883, when a 30 x 100-foot frame building was erected over the river, which was dammed above the shop and channeled under the east wing to provide power. The stamping and de-burring rooms were on the ground floor, milling and tooling on the second floor, wheel-cutting on the third, and final assembly was performed on the top floor under dozens of skylights. Hardening and bluing was done in the basement kiln. Master mechanic George Heath and a crew of fifty fabricated the automatic tooling in the existing Marine shop and transferred it all to the new addition to be installed and calibrated the following year. After ​World War I the building was used for clock production and demolished sometime around 1935.

Learn more about your Seth Thomas pocket watch, including grade assignment, run totals, production dates, jewel counts, which catalogs they appeared in, the patents that covered them, and who was running the factory at the time.

All photos and data protected by copyright.